The Clipper Round-the-World Yacht Race 2011/12 is drawing to its end. Over its ten months and 40,000 miles, the 450 crew members of these ten 68-footers have witnessed first-hand both drama and danger; they have battled through fierce competition and forged intense bonds of friendship that will last a lifetime. And it’ll all be celebrated in epic style this Sunday, 22 July, when 15,000 members of the public will descend on Southampton’s Ocean Village to welcome back the fleet and their crews, and crown Gold Coast Australia the overall victors.

And while we all cheer their success, it’ll be a moment that resonates especially deeply for one onlooker. Brendan Hall was the winning skipper of the last Clipper race in 2009/10 in Spirit of Australia. It was a hard-fought and dramatic race that inspired him to write the remarkable Team Spirit – now published by Adlard Coles Nautical.

On the eve of this spectacular finale, Brendan offers below some reflections on his own memories of the race. He’ll also be at the finish on Sunday, signing copies of his book in the Recruitment Tent – so if you’re going to be there, do take some time out from the live bands, air display, flotilla and parade to pop by, say hello and get your own personalised copy!

Winning the Clipper Round the World Race was not an easy task. There were 10 highly competitive, determined teams at the start line, but when those teams crossed the finish line 10 months later, there was only one winner.

When my crew and I aboard Spirit of Australia crossed that start line in the River Humber in September 2009, we wanted to win the race. It had been my personal ambition and focus for nearly two years before the start. I prepared myself, my boat and my crew to the highest level to give us the best fighting chance. After circumnavigating the globe, we sailed back up that famous river at the end of the race. We were clear winners, 22 points ahead of our nearest rivals, Team Finland.

It was the race of a lifetime.

In the months since the race finish, I have been asked numerous times :

Why did we win?

What was it like being the skipper of such a competitive boat?

Did your crew always get along?

What were the highs and lows of the race?

The victorious crew of Spirit of Australia

It was these questions that made me realise my story was one worth writing down, not only to give a narrative account of the race from a skipper’s perspective, but also to convey some of the leadership lessons I learned on the race.

On a cold, January morning, I opened my laptop and began typing the first words of the book that I have titled Team Spirit: Life and Leadership on One of the World’s Toughest Yacht Races.

Slowly, at first, the story of our race took shape on the page. The big events and dramas of our race came easily: the colour and noise at the start – our 45-knot crash gybe in the South Atlantic – the towering steel-grey waves of the Southern Ocean – the punishing upwind sail up to Qingdao when I asked my crew to do the most dangerous of headsail changes. Our rescue of Hull & Humber, after their skipper broke his leg. Then the rescue of the dismasted California Clipper in the North Pacific. Sailing through the teeth of a hurricane. Powerful memories that were just as vivid to me as they day they happened. 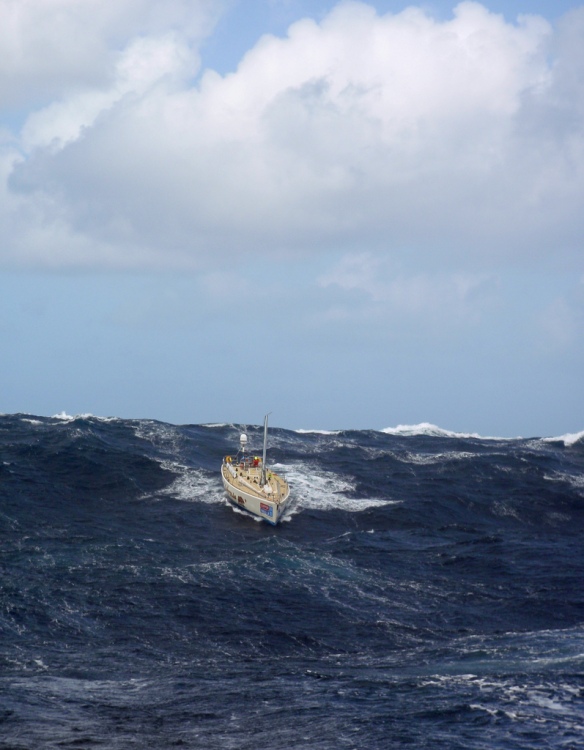 Articulating my own emotions and reflections was more challenging. The race had been an emotional rollercoaster for all of us, but as the skipper I had to keep my emotions closely guarded. I remember the low feeling after making a bad decision in the South Atlantic which resulted in us badly tearing two sails and sacrificing our race. I remember the elation of the race finishes, when we joyously celebrated the reward of our persistence. The stress and pressure of racing 24/7. The constant worry about the safety of my crew. Keeping myself and my crew motivated when I was mentally and physically exhausted. These were the things that took their toll on me, but which I think give an insight into the very unique world of a Clipper race skipper’s life at sea.

Writing about leadership was the most challenging part of the book. I learned a lot from the race, about myself, about being a good leader, about making mistakes and learning from them and managing a very diverse crew. Our success in the race came down to factors which were entirely human: energy, persistence and support. We had a fantastic culture on board Spirit of Australia, so as well as the story of the race, I want my book to give an insight into how that culture made us the winning team.

Buy your copy of Team Spirit here, or find us in the Recruitment Tent in Ocean Village all day on Sunday 22 July.