We are excited to host a special guest blog from Sandra Clayton, author of our new book A Thousand Miles from Anywhere.

A Christmas at Sea

David and I had spent Christmas in some unusual places even before we became offshore sailors. But one of the more memorable occurred a thousand miles from land in any direction during a two-handed Atlantic crossing on a 40-foot boat.

Before we left the Canary Islands I had surreptitiously bought a Christmas card for David and while he slept in the aft cabin I sat down at the chart table to write it. He had lost a lot of sleep through bad weather during the previous few nights so I was trying to make as little noise as possible during my watch.

As I opened the card a terrible screeching sent me rushing across the bridge deck to the gas alarm. It makes that kind of noise to warn you that gas is escaping into the bilges and if you don’t do something about it fairly quickly your boat can blow up. Even as I stared at it, however, I realized the awful noise wasn’t coming from the gas alarm but the chart table I’d just left. I had unwittingly bought a “musical” card and it was shrieking “Jingle Bells” fit to wake the dead.

Despite a tumultuous sea we celebrated the day in festive style. We had a tree in the corner of the saloon, although every so often the decorations fell off as Voyager rose and fell on huge Atlantic rollers. We had cards from family and friends, collected en route, strung between the barometer and the boathook. And on Christmas Day we had as near as possible the traditional dinner, even if our plates did occasionally get away from us and the wine glasses had to be wedged to stop them falling over.

Something a three-week sea passage gives you is plenty of time for reading and among the books we had on board was A Christmas Carol. As quite often with Charles Dickens, the central theme is materialism. Two years earlier David and I had opted out of a conventional lifestyle but when I’d picked up the book I’d had no thoughts about it being relevant, only seasonal.

For Dickens, Christmas represents those qualities – generosity, kindness and compassion – which make us fully human. Accordingly, the three Spirits of Christmas reveal to Ebenezer Scrooge the kind of world he is helping to create by devoting his life to the counting house; and by consigning the poor and afflicted Tiny Tim to an early grave because he has no value on a balance sheet. Whereas the little boy’s immeasurable gift is the life-enhancing effect he has on those around him.

It is interesting how the small details that lodge in the memory tend to change with your own changing circumstances. For instance, although I’d read this book several times before I had not remembered that the Ghost of Christmas Present takes Scrooge out over a raging sea, to show him how even on an isolated lighthouse the spirit of Christmas touches the two hardened men who tend the light. Or onto a heaving ship, where every man at his station has a kinder word for his fellows than on any other day.

But then, until comparatively recently, lighthouses and raging seas had not loomed very large in my experience. Nor had the kind of selflessness of two distant yachtsmen, whose actions were conveyed to us by a third party that morning over a crackling radio receiver. The couple had turned back thirty miles in awful weather and begun towing another yachtsman whose boat had been dismasted in a squall the previous day. Out in Voyager’s cockpit that Christmas night, on watch on my own solitary stretch of a dark and heaving sea, A Christmas Carol resonated more than ever before.

And then a whale turned up. But that’s another story. In the meantime, may the spirit of the season be with you and yours and throughout the coming year. Or, as Tiny Tim observed, “God bless us, every one!”

In the late ‘90s Sandra Clayton and her husband David sold up their home and set sail in a 40-foot catamaran called Voyager.  Her third book, A Thousand Miles from Anywhere, will be published by Adlard Coles on 6 January 2013 and charts their Atlantic crossing to America via the Caribbean Islands – plus a few eventful days in the Bermuda Triangle. 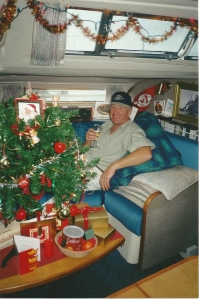 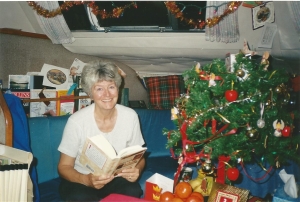