Adlard Coles author and former Motor Boats and Yachting columnist Angela Rice, the ‘Reluctant Boating Wife’, has moved on. Her ‘Mad Sailor’ husband is now content to follow her voyages rather than join in himself – the siren call of the oceans has been replaced by the lure of home comforts since he, as he terms it, ‘matured’. ‘We can now cross the Solent on a ferry without him practically falling over the side to get aboard one of the passing yachts, so great was his yearning to join them,’ reports Angela. ‘It’s not just age or even plain idleness, though both apply. He is just no longer in love with the former passion of his life.’ Angela, ever contrary, has however now graduated from power boating to enthusiastic sailing…

The plan is an Autumn passage from Rhode Island to the Caribbean. The notion had evolved into a serious proposition during our Biscay crossing the previous year on the CR40 of our friends, Priscilla and Paul. My American buddy Richard who had joined us to offset my lack of skills would this time be skippering his Catalina 380, Swallow, and they and I are to crew.

A year ago we all thoroughly discussed the routing. Richard had done his homework as only he can. No text left unperused, websites extensively trawled and blubber well chewed with his fellow Rhode Island ocean-going captains. The clever bit, it emerged, was to get out of RI before the winter gales take hold – but not to have to loiter too long in (expensive) Bermuda, waiting for the Weather Gods to notify us, via their meteorological earthly representatives, that they have blown their last hurricane for the season. The WGs’ other agents, the marine insurers, are clear that this may not be deemed to be so before 1st November. 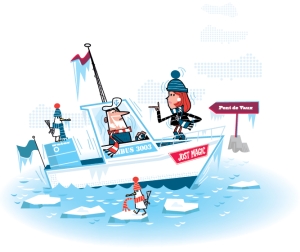 Richard sent us articles for and against the two possible routes. The alternative to the direct passage is to sail down the East coast as far as the Chesapeake, and then either head for the Caribbean direct (about 12 days), or via Bermuda (approx. 5 plus 10 days). Longer – we would be heading hundreds of miles SW to reach a destination due South, and colder – no short dash to the ‘warm frontal boundary’ of the Gulf Stream. The three of us on the RHS of the Atlantic discussed the options; charts were peered at, weather patterns reviewed and finally all was decided by an adult, mature transatlantic consensus. From the end of October, as soon as a 5-day weather window permitted, we would sail direct for Bermuda, restock and then run neatly down to the island of St Maarten, to be rewarded with sunshine, balmy evenings and great cruising. Simples.

So all was settled. Until I was booksigning at the Southampton Boat Show recently surrounded, improbably, by some of the Greats of the cruising-cum-writing world – including Don Street. Don Street, for the few who don’t know of him, is regarded as America’s Old Man of the Sea, based on his 60 or so years of writing cruising guides and pilots based on his own huge experience. So, picture it, Lowly Seaworm with copies of her one slim and distinctly frothy Reluctant Boating Wife paperback on the table in front of her, initiating polite conversation with her neighbour, half hidden by his pile of properly serious publications. In a pathetically transparent attempt to dispel my frivolous image, I mentioned our plans.

Don, I quickly discovered, is not one for polite conversation, or frothy females. ‘Asinine!’ he barked. ‘Why won’t anyone listen?! I have been telling the world for 50 years – in an article which has been reprinted in the yachting press umpteen times – that To. Go. Direct. To. Bermuda. From. Rhode. Island. In. November Is. Suicide! Playing Russian Roulette with the weather! I wish these Forecasters would stop pretending that there is such a thing as a five day-weather forecast in the North Atlantic when November gales can come from nowhere in 2 days! You’re mad! Over 50 people have died on that passage since then – ten of them personal friends of mine. DON’T DO IT!’

I scuttled off round the corner to find Paul and Priscilla, who were respectively manning and womanning our Yacht Club stand at the Show. ‘I think you should go and speak to Don Street about our passage plan.’ They did, in some detail. And returned looking distinctly thoughtful, muttering phrases along the lines of ‘reconsidering our plans’ and ‘reviewing our risk assessments.’ A quick tripartite conference was held somewhere between the sailing boot and the flotilla holiday stand. ‘Are we mutinying?’ ‘Possibly.’ ‘So who is going to break the news to the Skipper?’ Priscilla and I decided to hide behind Paul’s skirts (shorts?), hoping that his being of the same sex and similar mindset might carry some weight.

The email went that night. MS2 replied with great patience and full respect for Don, but much greater respect than him for the advances in meteorology over the last 50 years. He did point out that he had sent, and we guiltily realised we had duly read, Don’s article all those months before. We had all been prepared to discount this at that time, as merely representing one extreme viewpoint, possibly an outdated one. Surrounded as he is by hearty Rhode Islanders who have made this trip multiple times, in even smaller boats, Richard remained unconvinced that with proper planning and prudence we couldn’t safely cross in five-ish days. He however politely invited alternative plans.

MS1 by this time was in on the act, on my behalf, my understanding of routing charts not going much beyond recognising that a preponderance of thicker red lines on the wind rose – particularly longer ones pointing directly opposite to the way you want to go – are, on the whole, to be avoided. Priscilla and I were both attracted to the thinner red lines south of Bermuda and favoured the – albeit longer and colder – route via the Chesapeake, taking advantage of harbours to run to, and MS1 was inclined to support us. Scientifically minded Paul, however, sharing Richard’s faith in modern meteorology, was unconvinced.

The result? Further research amongst his fellow Captains and close cross examination of the organisers of the NARC (as in ‘Not the ARC’…) Rally, which does the Newport, RI / Bermuda crossing in November each year, inclined MS2 to give greater credence to the view that reliable weather windows do indeed become rarer and shorter as the Autumn progresses. This is why the NARC now discourages slower boats, defined as under 45 foot, joining their November rally. The new plan is therefore to leave asap in October, before the winter weather sets in too fiercely and spend longer in Bermuda. (Oh bother.) If we are pushed too close to November we have agreed to equip ourselves with ice scrapers and take the long, cold passage down the East Coast to the Chesapeake. We would then route via Bermuda, Richard being of the opinion that the ‘duration risk’ of a 12-day plus passage has its own perils.

As our flights from the UK have been booked for months, the earliest departure date is 13th, as soon as Paul and Priscilla arrive. However I don’t come over till 17th. Sacrifices have had to be made by everyone. MS2 now has less time to complete his complex preparations, P and P have had to wave goodbye to the happy plan of a shakedown sail to Martha’s Vineyard before I arrive – and if the right weather window opens up before 17th I shall be flying over their heads to join them in Bermuda the easy way, in the best tradition of my former Reluctant Boating Self. And RBW2 may find herself doing the provisioning, despite her strenuous efforts to dissociate herself entirely from the venture.

But if departure is after 17th, I will be there…

Angela Rice is the author of ADVENTURES OF A RELUCTANT BOATING WIFE (RRP £8.99), available now for a one-week-only bargain price of £4.50 when you buy direct from us: http://bloomsbury.com/uk/adventures-of-a-reluctant-boating-wife-9781408182048