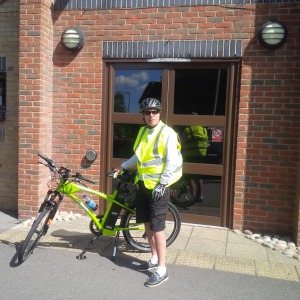 Bestselling author Nick Ward is taking on a new challenge on the 22nd August. To raise money for a charity close to his heart, Nick will ‘sail’ around the Isle of Wight by Bike to raise money for Smile4Wessex.

He will cycle 100km around the Isle of Wight to say thank you to Wessex Neurological Unit who gave him the precious gift of life back in 1971.

The Smile4Wessex Appeal aims to support the work of the Wessex Neurological Centre (WNC) by raising funds for projects that:

To find out more about Nick’s challenge and to support him visit the Smile4Wessex website.

Professional artist and writer Justin Tyers and his wife Linda lost everything in a disastrous house fire. Seeing opportunity in the rubble, they decided to start a new life for themselves by building a classic sailboat to live aboard from scratch – starting by felling the trees. Justin wrote Phoenix from the Ashes about the experience, and we have just published his new book, CANVAS FLYING, SEAGULLS CRYING: From Scottish Lochs to Celtic Shores. In this exclusive extract, Justin reveals how he fell in love with sailing.

The first boat I ever owned was a Westerly GK 29 called Good Knews. I think it’s in Ireland now. The GK 29 had a reputation for being fast but the price you paid was that they were very light and tender and whenever you stepped on board, the mast would swing toward you and give you a black eye.

My GK 29 was a bit of an impulse buy. In my twenties all I knew about boats was that they were meant to float but sometimes sunk, famously, and with the loss of many lives. What gave me the idea to buy one was that I was working in London and one Sunday in January, without the least interest in botany, decided to visit Kew Gardens. I didn’t have any friends so went alone. I was walking with my hands clasped behind my back in the manner that I’d seen other lone visitors walk – it made them look very knowledgeable about plants. I didn’t realise back in those days that walking with your hands clasped behind your back, and knowing a lot about plants, are both sure-fire ways of ensuring you never get any friends. Of a sudden the low-hanging fronds of a palm tree brushed through my hair, sprinkling me in a kind of exotic stardust which asked me why I lived as I did?

‘Take stock of your life,’ it seemed to say. ‘Not only are you miserable but you are the cause of misery in others. Why waste yourself in city-work when you could buy a boat, sail to the other side of the world and spend the rest of your life loafing around on white-sand beaches, eating coconuts and bananas?’

The question of whether a GK 29 was a suitable boat to get me there not only never crossed my mind but would have seemed technically irrelevant if it had. In my judgement a boat either floated and was therefore seaworthy, or it had ceased to float and was unsuited to my purpose.

From among the thousands of boats on the market my decision about whether or not to buy this boat was strongly influenced by three factors:

Firstly, the bloke who owned it seemed a nice chap – he was a doctor, you know?

Secondly, it was afloat. There could be no doubt about that because when I stuck my arm into the water alongside it I couldn’t feel the bottom.

But the clincher – and I wasn’t expecting this – was that it had pink racing tape running down either side of the deck.

I was a young man in my twenties and although I was interested in boats, to a degree, I was more interested in girls. Instinct told me that those flashy racing strips would be a girl-magnet. In fact, I remember feeling slightly embarrassed that a married man in his forties – and a doctor, at that – could be so obvious. There he was standing on deck explaining the advantages of a tri-radial spinnaker when all I wanted to know was how often he’d had to kneel on a Sunday in order to confess another pink-tape triumph. But I couldn’t ask him, what with his son standing there. So I bought the boat on trust and hoped that the tape would do its work.

It was only after dinner one evening when I settled down to carry out my intensive planning for a voyage to the other side of the world that it occurred to me it might be nice to go with someone, for company. I imagined that it could take several hours to cross an ocean and it would be nice to have someone to talk to. In many ways my friend Spearsy seemed like the ideal partner: he knew less about sailing than I did, so was unlikely to question my authority, and I like people who laugh easily. Another point in his favour was that Spearsy never stopped laughing. The braying of a horse was a whisper to it. God, I can hear him laughing now.

I recognised that the first qualification of a sailing companion was that he – or she – should be of sound mind and judgement, but realised that Spearsy was probably all I could get. We’d worked together for the previous eight months and he’d seemed the happiest man alive, but one day he came into work and a single glance at him told me that his blue skies had turned to grey again – the woman he loved had spurned him. That tragedy launched him into a parallel universe and only his corpse was left dragging itself long-faced through this one. I knew that if I acted quickly I could capitalise on this brief window of grief.

We both worked selling telecoms equipment – he wasn’t a successful salesman so I waited for his monthly sales figures to come in and then seized my opportunity to announce the idea of an around-the-world adventure at the very moment I knew he would be considering his future.

It’s dangerous to embark on a long voyage without the necessary experience so we agreed that in the first instance we’d drift about in the Solent pulling on bits of rope to find out what they did in a variety of conditions not exceeding Beaufort Force 4. Then when we’d got the hang of it, we’d ask someone in which direction we should head off if we wanted to see the Marquesas…

You can view – and purchase – more of Justin’s wonderful artwork on his website: http://www.justintyers.co.uk

A book about sailing, written at sea by Emma Bamford

All too often, when you are sailing, the wind and tide seem to be against you. At first, it seemed that way with my writing.

Shortly before I left my job at the Independent newspaper to go sailing, in the summer of 2010, a colleague suggested there might be a book idea in my upcoming trip and put me in touch with an agent.

I’d always loved books, and even tried writing a novel and a book about dating in London but was rejected by publishers and agents for both.

The agent, it emerged, wanted an update of Lucy Irvine’s raunchy Castaway. ‘Not likely,’ I thought, but I saved his email address anyway, in case I came up with a better idea.

After that, having adventures – sailing into the heart of the Borneo jungle, anchoring amid beautiful coral gardens, crossing oceans and visiting remote islands peopled only by hunter-gatherer tribesmen – absorbed me so completely that writing a book was furthest from my mind.

Fast-forward a couple of years and you’ll find me finally starting to write, stretched out in the cockpit of a sailing yacht anchored in Malaysia. Each morning, before it got too hot, I dug out my diaries and expanded on them, amazed at how easily the words flowed.

Perhaps they flowed too easily because the agent hated the 10,000 words I sent him, saying I’d ‘never get a publisher interested’.

Luckily, he was wrong. ‘Send me everything you’ve got,’ said Adlard Coles’s commissioning editor, Liz Multon. I did – and she turned me down, but kindly offered to read my manuscript again if I felt like re-writing it.

When I got her email I was living in a marina in St Petersburg, Florida, waiting for a new engine to be fitted to a 40ft Choate I was helping to deliver from Texas to St Lucia. I had time to kill, so I parked myself in the Captain’s Lounge, pencil in hand, and re-did the whole thing. Six months later I got an email from Liz saying Adlard Coles would be publishing Casting Off.

Proof that perseverance in whatever you do – whether it’s following a dream or simply tacking your way into a headwind – works. Keep at it, and you’ll get there.

Our guest blogger today is Emma Bamford, author of Casting Off. Read a few pages from her fantastic new book.