We are very sad to report the death of our longest-standing author, Alan Watts.

Alan had already had one career in meteorology before he started a new one as an author. It was our founder Kaines Adlard Coles himself who finally managed to convince Alan to write a book that combined his professional expertise with his interest in sailing. Alan was apparently unsure about writing one to begin with, but eventually he came up with the idea for a book with photos of the sky to help readers work out for themselves what to expect.

That book was called Instant Weather Forecasting, and was first published in 1968 (this first edition is the one pictured). Over half a century later it has never been out of print, with Alan having returned to it for four new editions over the years, most recently in 2016. Though initially aimed primarily at sailors, it found fans in people taking part in all manner of outdoor activities. It has sold over a million copies in numerous languages in the past 52 years, making it perhaps the bestselling Adlard Coles book of all time. 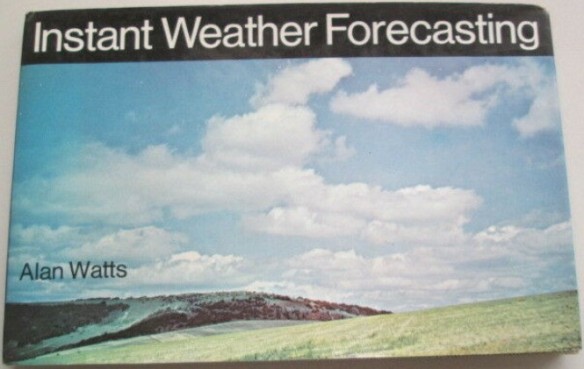 Even Alan was surprised at just how successful the book proved to be, but it inspired him to write numerous other books on the weather, including similar but more focused books along the same lines, Instant Wind Forecasting and Instant Storm Forecasting. Aside from Instant Weather Forecasting, his most successful book for us was The Weather Handbook. He had been working on a fourth edition of that at the time of his death, and we will publish it this autumn.

His longest-serving editor at Adlard Coles was former director Janet Murphy, who said, ‘I worked with Alan for so long that it seems inconceivable that he isn’t still at the helm of the Adlard Coles meteorology list. His name is stamped all over so many market leading titles, and will be for years to come.’

Alan has left a fine legacy of weather books, and as the weather only really changes from hour to hour rather than year to year, we can easily foresee his name still being held in high regard for expertise and accessibility another half a century hence.