2020 is Visit Scotland’s Year of Coasts and Waters, and on 2nd April we are proud to publish Stuart Fisher’s new book, Coastal Scotland. Stuart wrote our perennial bestseller, Canals of Britain, and last year we published Coastal Britain: England and Wales, in which he completed the most comprehensive survey of the English and Welsh coastlines. Now he has done the same for Scotland’s coast, one of the most diverse and attractive shorelines in Europe. In this exclusive extract he paddles in the magic of Skye.

To Ptolemy it was Scitis Insular. To the Norse it was Skuyo, the isle of clouds, because of its cloud cap. To the Celts it was the winged isle, An t-Eilean Sgitheanach. In Gaelic it is also Eilean a’ Cheò, the isle of mist. At 77km long and covering 1,740km2, it has over 1,600km of coastline yet nowhere is more than 8km from the sea. It is the largest of the Inner Hebrides, inhabited for at least 4,000 years and under Viking control until 1263. In the mid 19th century, before the Clearances, the population was triple its present 10,000. It was opened up by the Victorians when they brought the railway to Kyle of Lochalsh but nearly half still speak Gaelic and the Sabbath is widely kept, including by most of the few petrol stations. It is mentioned in more songs and poems than any other place, including in Somhairle MacGill-Eain’s The Island. Dog enthusiasts know it for the Skye terrier. 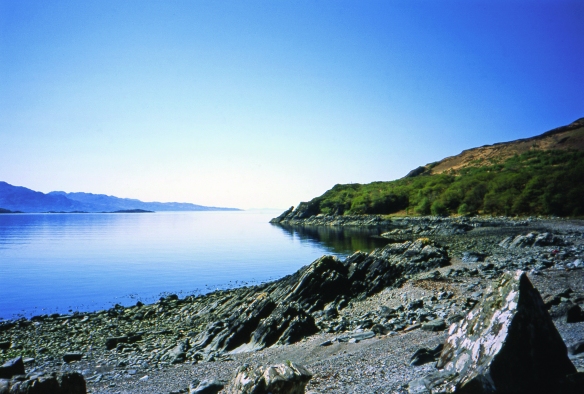 From the Point of Sleat the Cuillin hills come into view, first the Black Cuillin to the west and then the Red Cuillin as well to their east. With the sun on them or a changing pattern of sun and clouds there is no better view in Britain. Moving north brings them ever closer. The Black Cuillin with their jagged frost 990m shattered crown of peaks consist of 50,000,000 year old gabbro with plutonic intrusions, elsewhere only found in northern Norway. The Red Cuillin are more rounded granite with acid plutonic intrusions, often looking more white than red. The name is thought to come from the Norse kjölen, high rocks or kjöllen, keels. This is the incomparable backdrop to this route. Also visible are various combinations of the Small Isles to the west.

Overlooking Ob Guascavaig is Dunscaith, the castle of gloom, ruined but well preserved with a drawbridge. This is one of the longest fortified headlands in the Hebrides, built by the MacAskills in the 14th century, the home of the MacDonalds from the 15th century until 1570, when they moved to Duntulm. The site had been home to the legendary Queen of Skye, Scathach, who taught warfare to the 3rd century Irish hero Cuchulainn and who had ramparts protected by an iron palisade with severed heads, then a pit of poisonous snakes and then a collection of beaked toads. He beat them all then married Bragela, the lonely sunbeam of Dunscaith, and the large Clach Luath stone is where he tied his dog after hunting.

He then left to defend Ulster against the Vikings but was killed and Dunscaith became a ruin. The present castle was built in a night by a witch or by Cuchulainn and his Fingalians. A young MacDonald daughter, married in the castle to a MacLeod against her wishes, fed her two sons to her husband and father in law. A Summer in Skye tells a long story involving the musician Ossian who one day fell asleep for a century in a fairy hillock, giant deer, a magic whistle and much more fantasy. In 1506 Donald the Stranger, the chief of the MacDonalds of Sleat, was stabbed by his illegitimate brother while inspecting a galley being built on the beach.

By comparison, the fort on Eilean Ruaridh seems to have been a much more placid and straightforward place. Fishermen in oilskins turn out to be cormorants that are perched on yellow rocks and the water contains nothing worse than seals.

At the end of Glen Lorgasdal there are stacks on the cliffs and in the water. Between them is an arch, behind which is a powerful waterfall and near which is a cave with a curtain of water across its entrance, a feature of a number of caves along this coast. It lacks only a sandy beach, the boulders being slippery except under the waterfall where there is dense weed like moss on the rocks, so a cold power shower can be taken standing or seated on a hot day. In the middle of the day the sun lights up the fall through the arch and there is not just a full circle of rainbow but much of a second ring. This has to be the most magical spot on the entire British coastline.